The Houston Marine & Energy Insurance Conference provides financial support to numerous educational institutions/programs to assist in providing scholarships and grants furthering the education of students studying marine and energy insurance and admiralty law. Since 2006, the Conference has donated over $1,500,000 in program assistance, scholarships and library assistance to a number of law schools and universities to aid their insurance programs and support their marine and energy law curricula.

Every year, the schools we support send student delegates to attend the Conference free of charge. For many, this is their first exposure to the business of marine and energy insurance and law and provided them with a venue learn about the different aspects of the business and network with established insurance professionals from around the globe. Many of our former student delegates go on to pursue careers in marine and energy insurance and law. Below are just a few of our Student Success Stories.

To see the different schools and programs that HMEIC supports, click here. 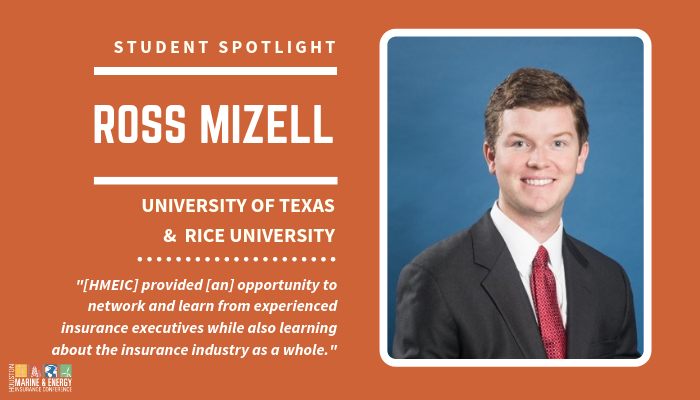 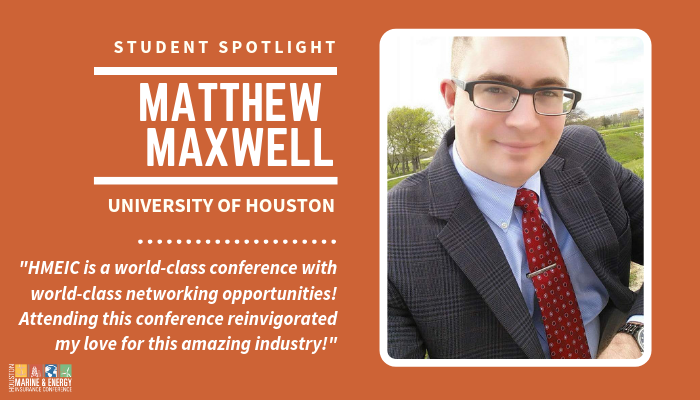 Ross Mizell first attended HMEIC as a student. He now works as an Underwriter (VP) in insurance at Arch Insurance Group. and says the conference provided him with a comprehensive view of the marine and energy insurance industry.

Matthew Maxwell first attended HMEIC as a student at The University of Houston Downtown. He now works as a Senior Adjuster in the Marine Claims Division of Tokio Marine America where he handles cargo claims. 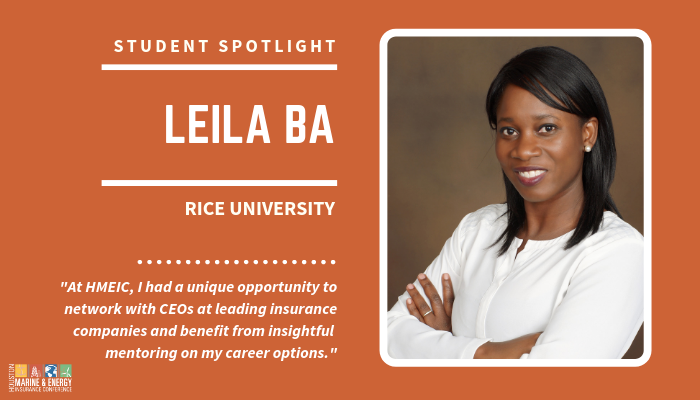 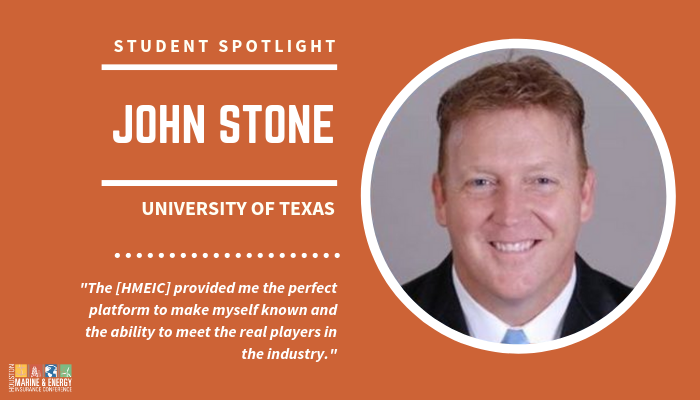 Leila Ba first attended HMEIC as a student in 2014. She now works with AIG and says the conference played an important role in helping her network and prepare for her career post graduation.

John Stone attended the HMEIC in 1994 as a student prior to his graduation from the The University of Texas at Austin. He currently is a Director of Risk Management for LUMA Energy in Puerto Rico. 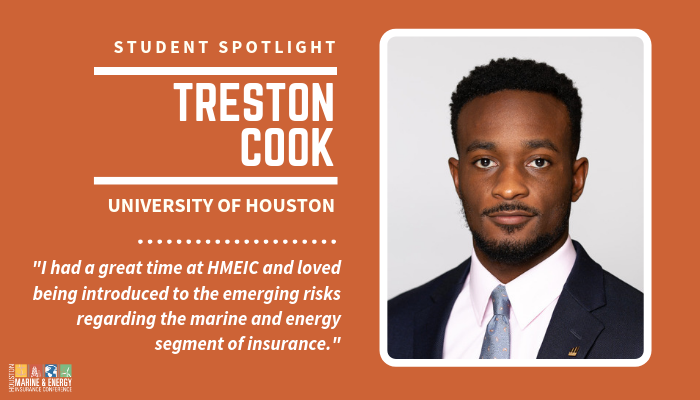 Treston Cook first attended HMEIC as a student at University of Houston-Downtown. He now works as a Talent Acquisition Specialist Career Resources Services and says the professionals he met at the conference were helpful and welcoming to him as a student attendee.

Irwin Morales, a graduate of the Insurance And Risk Management program at the University of Houston-Downtown, attended HMEIC as a student in 2014, 2015, and 2016. He is currently a Commercial Lines Account Technician at HUB International and says the conference motivated him to pursue a career in marine and energy insurance. 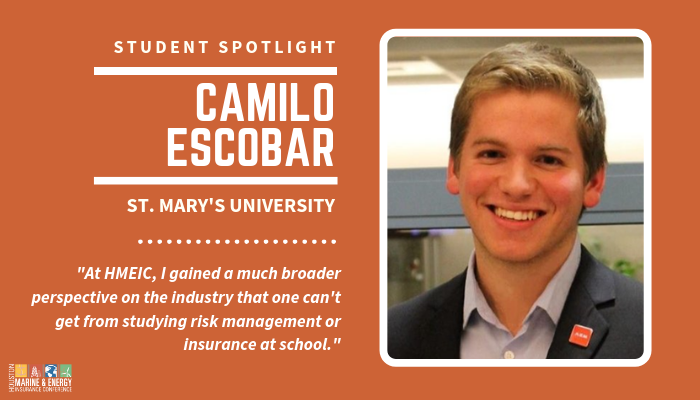 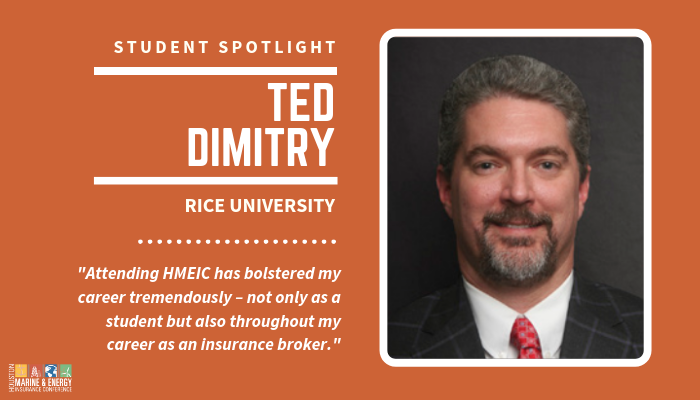 Camilo Escobar, a graduate of Finance and Risk Management programs at the St. Mary’s University, attended HMEIC as a student in 2017. After attending the Conference, he knew he wanted to be part of the marine and energy insurance industry. He is currently an AVP Marsh.

Ted Dimitry attended the HMEIC as a student in 2001 while he was at Rice University’s Jesse H. Jones Graduate School of Business.  He says, his favorite part of attending the Conference was the networking that took place during the student reception and cocktail parties. The connections he has made attending HMEIC over the years have been essential to the development of his career. Today, Ted is the Energy and Marine Practice Leader at Higginbotham in Houston.

The LSU Law Center’s participation in the John R. Brown National Admiralty Law Moot Court Competition is made possible, in part, by funding granted by the HMEIC. 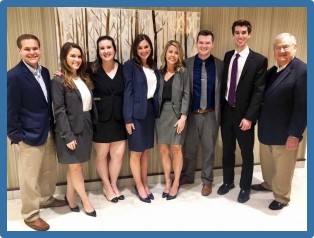 On March 24, 2018, one of the Houston Marine and Energy Insurance Conference sponsored schools, won the Judge John R. Brown Admiralty Moot Court Competition, an interscholastic appellate moot court competition focused on Maritime law. The LSU Law team of Jessie Finley, Sara Kuebel, and Jacob Cunningham won the 2018 John R. Brown National Admiralty Law Moot Court Competition in Seattle and the team also won the competition’s Maritime Law Association of the United States Award for the Best Brief. LSU Law used the Funds awarded to it from the HMEIC to pay for travel to Seattle for the prestigeous competition. When asked about the experience, Ms. Kuebel remarked, “Without the generosity and support of the HMEIC, LSU Law would not have been able to claim our third of the last four John R. Brown Admiralty Moot Court National Championships. Our team is sincerely grateful for the contributions of HMEIC and forever indebted for their philanthropy. We were thrilled to be given the opportunity to pursue our passion for maritime law.” 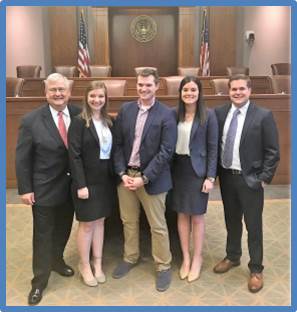 Using grant money provided by HMEIC, the University of North Texas College of Business held its first faculty-led risk management and insurance study abroad course during the summer of 2018, enabling 13 students to expand their understanding of global risk management by spending 15 days in the UK. The student group visited Lloyds, as well as several other companies to gain a better understanding of each one’s particular risk management strategies and challenges. Companies visited included Visa, Grant Thornton and Weir Company (a manufacturing and engineering firm in Scotland that services vessels). 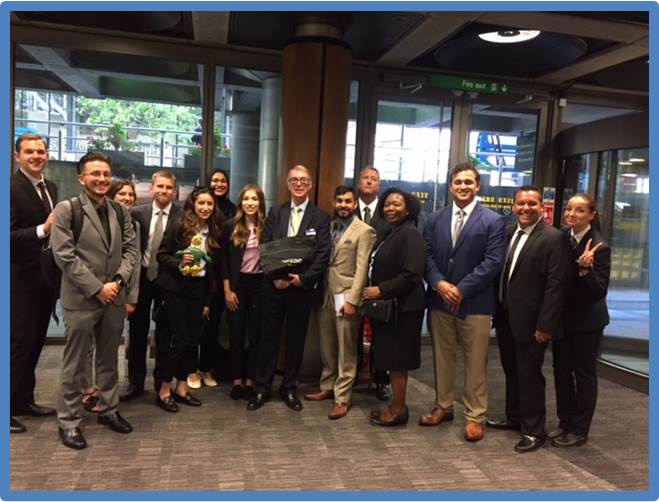 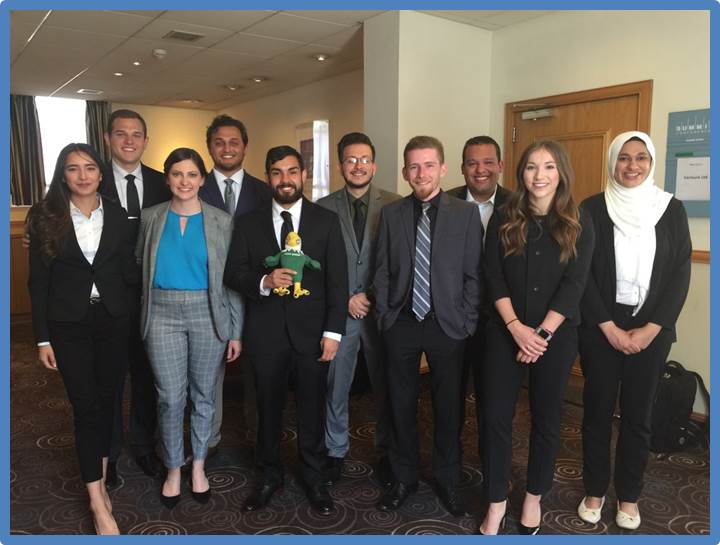 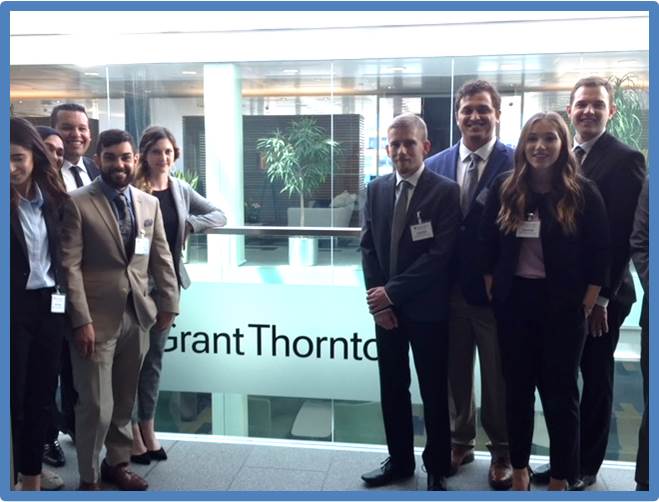 The Houston Marine & Energy Insurance Conference, a 501(c)(3) organization, has awarded over $1,200,000 in program assistance, scholarships and library assistance to a number of law schools and universities to aid their insurance programs and support their marine law curriculum, making it one of the leading scholarships in the areas of marine and energy law and insurance.  We currently support educational institutions/programs, which provide scholarships in insurance education, admiralty law courses, law libraries and admiralty moot court competitions.